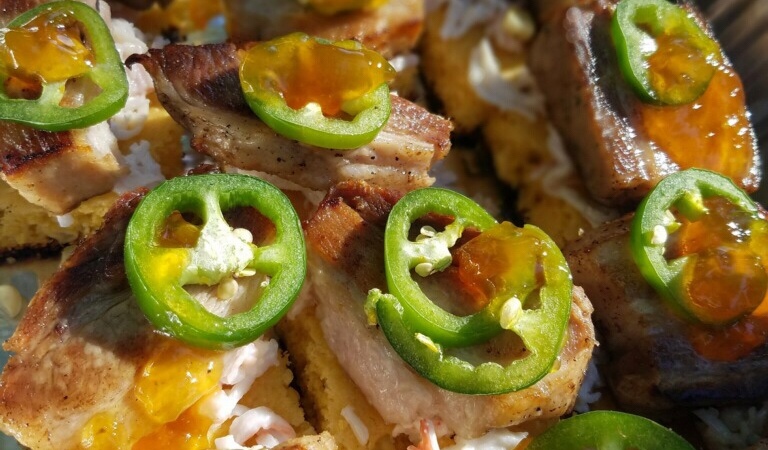 There is a really fabulous dish done up at Land & Water Co. in Carlsbad. It’s spectacular and if you get a chance to try it, do so! Here it is: 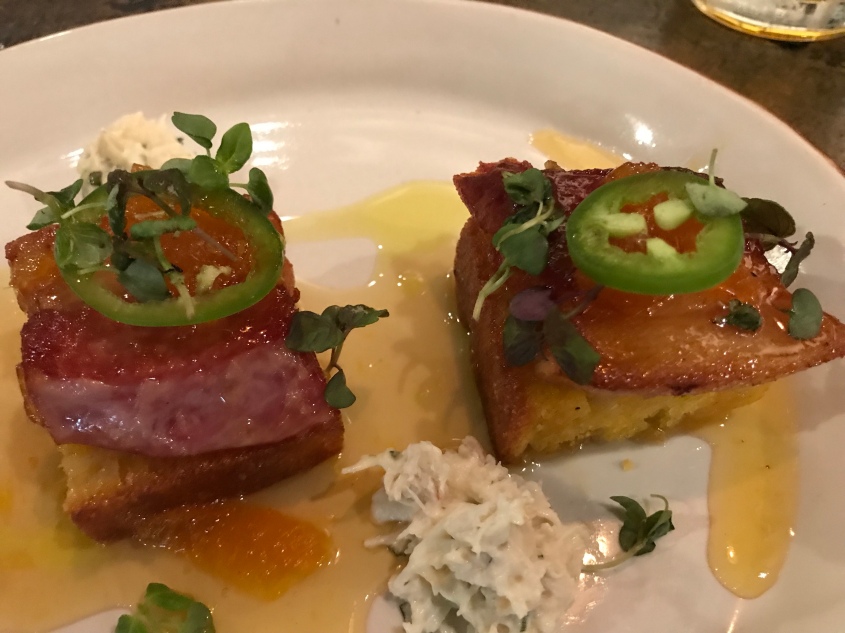 Anyway, I wanted to try and re-create it as best I could but also be able to do it at scale for campouts with a large group. I had the cornbread down and had done pork belly on the smoker, but never really figured out how to do it well on the stove top or oven. Then, I found this recipe on Pinch & Swirl which is both easy and great although it does take a lot of time just in waiting. I changed it up slightly on the rub, but stuck to the technique.

Also, had to figure out how to get all this done out in the sticks with maybe a gas grill, a flat top, and a fire pit. Biggest challenge was getting the cornbread cooked through without scorching the bottom.

So, here goes my recreation for 100 hungry dads in the boonies:

I did the pork belly in the oven ahead of time as with this recipe it was even better after doing so and letting it sit a couple of days…perfect for cooking up and packing down in a cooler. Rub down your pork belly w/ rub and put it in the frig overnight if possible. I roasted it in a cast iron pan at 450F for 30 min and then cut it back to 275 for 1hr, removed it, let it cool, and then wrapped it in plastic wrap and put it back in the frig overnight as the directions in Pinch and Swirl directed and packed it down in the cooler.

When ready to get to it, I fired up the gas grill we had to 400F (or thereabouts…think we need a new thermometer!) and took out a square cast iron skillet (you really need to go w/ a square or rectangular pan to cut into squares) for my Slap Yo Mama Cornbread. This was the most challenging part of the whole thing was getting the cornbread cooked through without scorching the bottom which I must have done 3 or 4 times before getting down the right technique. Basically, I put it directly on the gas grill at 400F for 10 minutes (put the opposite burner on full heat and the one directly under the cornbread at the lowest I could get away with while keeping it at 400F). and then put it on the top rack for 10 minutes more to cook through and rotated another pan of cornbread back on the grill top until I had knocked out about 4 trays of cornbread. Perfection…even thumbs up from all the 5 year old girls out with their dads for the weekend (that’s an endorsement!). Any other tips on what works best for keeping it from burning and still cooking through, would love to hear ’em.

While that was going, we cut the pork belly into slices maybe 1/2 inch thick, put them on a scorching flat top and seared it on both sides.

When the cornbread was done, I let it cool a bit, cut myself a square, put a little seafood salad on top, added a piece of seared pork belly, added a slice of jalapeno, drizzled some peach preserves over the top (original was orange marmalade, but I really like peach or apricot).

Ta Daaaaah! Not as good as the real thing (you really need to go try it!), but DAAAAMN!

Gracias TooManyHobbiesGuy for the nice feature snap…I was up to my elbows in pork belly and forgot to get a decent camera shot!

No Ads, No Fees, Just Donate to Big Brothers Big Sisters of San Diego if you have the means…great program!